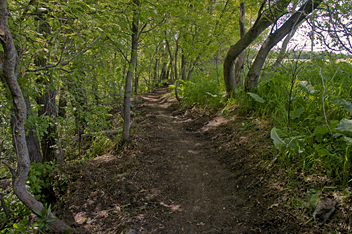 The Crow Wing Trail is part of the Trans Canada Trail. It runs from Emerson to Winnipeg, passing the plains and forests of Manitoba, interior of Canada. The origin of this path is interesting: In 1844 a new trade route was opened - Crow Wing - on the east side of the Red River, avoiding the feared Sioux Indians on the west side of the river.

Nowadays there is no reason to fear the Sioux. Beware however: November is deer hunting season. If traveling the trail at this time of year remember to wear bright colored clothing.