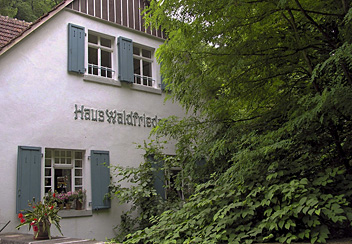 The Alemanni were the united tribes from the beginning of our era that fought with the Romans, with varying success. Eventually they managed to push back the Romans, but in the fifth century they themselves were displaced by the Franks. In the Odenwald, where this path leads, these feats took place, but there is nothing you might encounter of that era.

The Odenwald is a mountain range in central Germany, south of Frankfurt, bordered by the Rhine in the west, in the East Main and the Neckar in the south. There are more hiking trails in the Odenwald. This walk - a Qualitätswanderweg - runs through the northern part of the Odenwald, the “Vorderen Odenwald”. Start and finish are in the Einhardsbasilika in Michelstadt. The area is characterized by both forest and agricultural land in a hilly landscape. In the villages you will find local hotels.